Shigeru Nakahara
BP-500X Kagerou (カゲロウ) is a Brave robot from The Brave Police J-Decker TV series. A triple-changer from the Brave Police, he served as the prototype unit for BP-501 Shadow-Maru and can be considered as his brother.

Kagerou was originally built as a prototype for Shadow-Maru in order to test out the multi-mode transforming system. Being Shadow-Maru's prototype, Kagerou can only transform into either a police car or a dragon aside from his robot mode. He is armed with a katana, a rifle, and his signature weapon, the kusarigama.

Kagerou and Shadow-Maru trained together, but he went rogue after finding that his memories were to be wiped when testing was complete. He evaded the Brave Police, who were assigned to capture him, with Shadow-Maru also allowing his brother to escape. He was later captured by Ken Shinjo, who wanted to use Kagerou's Super AI to build a robotic version of himself since he was in ill shape. Kagerou's body was reprogrammed into a mindless war machine as a distraction, which Shadow-Maru was forced to destroy in order to save the others.

Kagerou's AI was later installed in a submarine by Ken. However, as the submarine begins to sink from damage suffered in battle with the Brave Police, Kagerou refused to do as his captor demanded, stating that he no longer wishes to fight, and allows Shadow-Maru, who infiltrated the ship, to escape along with Ken, as Kagerou goes down with the submarine. His final wish was for Shadow-Maru to join the Brave Police, which was honored by his brother.

Since his AI was captured, it was copied and used by Excellent Company to build enemy robots, both Victim and the Chieftan series.

It is possible to save Kagerou in the Brave Saga games, which will allow him to join your team. 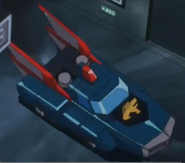 Kagerou appear in Brave Saga and Brave Saga2, if want Kagerou join the team, just don't let him killed by Abyss guards. With this save data, if converted into Brave Saga2 data with game started, later showdown with Shogun Mifune, Kagerou appear and joining the team.