Deckerd
McCrane
Dumpson
Power Joe
Shadow Maru
Drill Boy
Gun Max
Duke
The Brave Police are the protagonist faction of the Brave Police J-Decker television series. They're a group of robot detectives that have been programmed with "Super AI", allowing them to have emotions.

BP-110 Deckerd was the first model to be built. Due to encounters with the human boy Yuuta Tomonaga, Deckerd's programming began to change, developing emotions and self-awareness.

After Yuuta was accepted into the police force, it was decided that the subsequent robots, such as the Build Team, would be programmed in Deckerd's manner; robots that have emotion.

Following the success of the Japanese division, other countries decided they wanted their own divisions of the Brave Police. England was the first country to collaborate with Japan with the construction of Duke. This was followed up with the construction of the Scotland Yard team, headed by Regina Argine. They were all destroyed by the Hameln waves that manipulated them into killing each other in Episode 47.

In episode 40, Deckerd has a dream of an alternate universe where he wakes up 6 months in the future to find that countries all over the world have constructed their own Brave Police units.

Japan has multiple Brave Police units that are assigned on the local level to municipalities. They appear to be based on Gunmax's design and do not appear to have a vehicle mode.

Add a photo to this gallery
Other countries also have created their own Brave Police divisions, such America and Greece. Like the local Japanese units, these also do not appear to have vehicle modes. 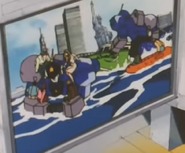 American Brave Police units in front of the Statue of Liberty and the Twin Towers in New York. They appear to be based on a modified version of Gunmax. 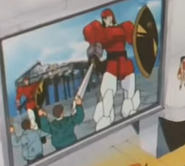 Brave Police at the Parthenon in Greece. They appear to have be based on Shadomaru's design.

Chinese Brave Police units at the Forbidden City, China. They also seem to be based on GunMax's design.
Add a photo to this gallery
Retrieved from "https://brave.fandom.com/wiki/Brave_Police?oldid=12422"
Community content is available under CC-BY-SA unless otherwise noted.