Comissioner Saejima originally conceived and was in charge of the Brave Police Project. He worked closely with his good friend, Chief Engineer Toudou, in order to construct the first robot, Deckerd. After Deckerd was revealed to be self-aware and friends with Yuuta, Saejima changed the rules in order to have Yuuta inducted into the police force as an Inspector despite his young age. He oversaw the Brave Police Division, and issued orders to them. He also acted as their liaison to the rest of the police force, often coming up against Vice-Commissioner Azuma, who was the Brave Police program's strongest critic.

He has a flamboyant, over-the-top personality. 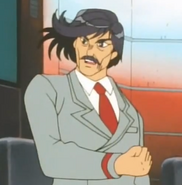 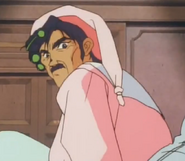 Saejima very proud what he done.

He is gone too far

Saejima at episode 06
Add a photo to this gallery

Retrieved from "https://brave.fandom.com/wiki/Juuzo_Saejima?oldid=8353"
Community content is available under CC-BY-SA unless otherwise noted.