Azuma originally was good friends with Ken Shinjo, the engineer who designed the Super AI computer chips that gave the Brave Police their self-awareness. He later served as the Metropolitan Police Department vice-inspector-general, and frequently butted heads with Commissioner Juuzo Saejima. Azuma was very critical of the decision to allow sentient robots to have Super AI, and deeply distrusted Yūta Tomonaga. He was also strongly opposed to allowing the Build Team to be given the Super AI chips, and constantly caused trouble for the Brave Police, such as threatening to fire Yuta and scrap various members of the team when they caused any sort of trouble.

Azuma strongly believed that they were nothing more than machines, as seen during events such as the fiasco with the Gunpulator system and his insistence they have 100% accuracy with firearms. While his stance did soften somewhat over time, he still did not approve of the program.

While he does not care much for the Brave Police team, his conscience does occasionally surface. He felt guilt over the fact that his good friend Ken Shinjo turned and used the Super AI from Kagerou against the Brave Police. He assisted in their investigation by giving them Shinjo's location and not preventing them from going after him. He would later consider it his fault that Excellent Co. got their hands on Super AI technology and were successfully able to build the Chieftain series of robots. 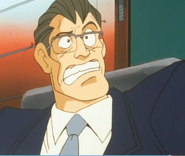