Ken Shinjo was born with a disease that made him weak and subjected him to violent attacks that included coughing and extreme pain. He dreamed of making an android body for himself, believing that by doing so he could be free of his health problems. During his younger years, he enjoyed a friendship with Kazuto Azuma, whom he often used as a confidant. He would later go to work for Excellent Co., and was instrumental in developing the Super AI chip used in all of the Brave Police robots.

Shinjo worked on both Kagerou and Shadow Maru, assisting in their creation and training even as his health worsened. He was very critical of the Brave Police having personalities, and claimed it served no purpose. After Kagerou went rogue, Shinjo captured him and removed his Super AI chip, intending to copy his personality into it and use it in a super submarine, but the plan backfired when the Brave Police pursued them and sank the submarine. The event made Shinjo realize that he was nothing more than a cowardly narcissist, and the realization left him a broken man. The submarine was destroyed and Shinjo arrested.

He was confined in a Tokyo detention center as his health declined even further. Victim O'Rand paid him a visit and try to convince him to join their team, but Shinjo refused and was badly beaten as a result. Regina Argine would later pay him a visit and ask how to remove all evil from the Super AI in her quest to create what she deemed a perfect policeman. Shinjo refused to help her, and left her with the comment "Ma'am, is it possible to purge evil from man and make him all good?" 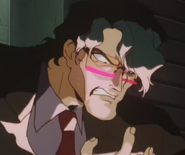 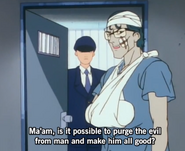 A younger Azuma and Shinjo as friends.
Community content is available under CC-BY-SA unless otherwise noted.
Advertisement