Shou Hayami
King Exkizer (キングエクスカイザー) is a Brave Robo from The Brave Fighter Exkizer TV series. A powered up version of Space Police Kaisers leader Exkizer, he is formed from the Gigantic Combination (巨大合体 | Kyodai Gattai) between Exkizer and his first auxiliary support vehicle King Roder. He can then further combine with Dragon Jet to form Great Exkizer.

Usually when dealing with larger enemies, Exkizer would summon King Roder by projecting a blue beam from his forearm port and combine with it to form King Exkizer. In this form, Exkizer gains a great deal more of size and power, allowing him to easily dispatch Geister Robos.

A breath of fire unleashed from the lion head.

A wing-shaped energy plate is emitted from each of King Exkizer's shoulder emblems, joined together, enlarged and thrown at the target like a boomerang. The joined energy plate resembles the Space Police Kaisers' emblem.

A pair of missiles are stored in the yellow portions of King Exkizer's knee armor.

The Kizer Sword is engulfed in a stream of fire released from the lion mouth before being used to fling a sphere of fire towards the enemy, trapping the target in a red energy dome and placing the target in a state of suspended animation. The Kizer Flame is usually unleashed first to lock down an enemy that is still capable of combat or movement in order to safely execute the Thunder Flash.

King Exkizer's finishing move. After being engulfed with flames from the lion head, with or without Kizer Flame executed in advance, the Kizer Sword shifts into a gold color as King Exkizer raises it into the sky, before it is struck with a stream of lightning, materializing a gigantic sword of light reaching high above. King Exkizer then proceeds to vertically slash the enemy in half with the sword. After defeating the target, King Exkizer returns his sword back to its compartment and poses, as the chest lion head roars. The attack's power and magnitude can also be adjusted to only hit certain areas if King Exkizer does not wish to heavily damage the target.

This is basically an enhanced variant of Thunder Flash, seen exclusively in Episode 9. After having the Kizer Sword shift to gold, King Exkizer moves the sword in a circular pattern while channeling cherry tree petals along with the sword. The Thunder Flash then proceeds as usual, this time with the cherry petals surrounding and trapping the enemy in place of the Kizer Flame as King Exkizer slices the target in half.

King Exkizer, Ultra Raker and God Max unleashes a powerful beam of energy from their chests in a team attack. Initially only seen in the opening until the Kaisers used the attack to ward off Dino Geist during his debut battle in front of the Braves.

A type of beam utilized by King Exkizer, God Max and Ultra Raker can put unstable energy sources back under control, like a nuclear reactor on the brink of explosion. King Exkizer's beam is projected from the lion head on his chest.

A gravity-manipulating beam released from the lion mouth.

King Exkizer can generate a powerful protection barrier that covers a wide area. Ultra Raker and God Max can also assist in increasing the barrier's power.

Similar to Exkizer, King Exkizer can emit a beam ray from his headcrest for repairing purposes. In Episode 19 it was used to quickly reform the dam that was transformed into the Geister Robo Gondam after King Exkizer defeated said Robo.

King Exkizer's first appearance is during Episode 2 of Brave Exkizer, saving the newly-built Linear Motor Car from the hands of the Geisters - Exkizer, after using Spike Cutter to slice the wires of the episode's Geister Robo open so that the Linear Motor Car is no longer restrained as a hostage, summons King Roder to become King Exkizer so that he will be big enough to carry the Motor Car to safety and then destroy the Geister Robo. The King Exkizer combination is used to combat Geister Robos for the first half of the series, until the introduction of Dragon Kizer. After that, the formation was only seen used for 2 more occasions: the first time in Episode 40, where King Exkizer rode on the Dragon Jet and infiltrated the Geister Base to rescue Kouta, while the second time was during the final showdown with Dino Geist in Episode 48. 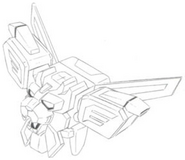 An enemy trapped within the Kizer Flame.

Aftermath of the Thunder Flash.